On Monday we had the pleasure of celebrating the 3000th episode of Engines of Our Ingenuity with a little party in a KUHF studio.  Fellow contributors like Andy Boyd, Michael Barratt, Haleh Ardebili, and Cathy Patterson joined KUHF personnel, including our current producer Paul Pendergraft and former producer Capella Tucker, for some cake and reminiscing. But it was really a celebration of John Lienhard’s great invention: a 3:25 radio featurette, a unique form into which we have stuffed almost everything on earth (and beyond, if you count astronaut Barratt’s episode from outer space) over the years.  We toasted John and his wife, Carol—who is well known to be the show’s longest serving editor and accomplice. 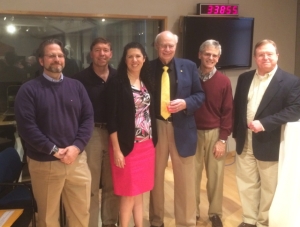 I came across this program in the early 1990s, when I first heard it broadcast over an NPR station in Virginia. I remember distinctly how I thought it unusual they would let an engineer talk about technical things like old World War I airplanes on the air. Then he veered into episodes about women in science, the insect empire, and the use of the first person pronoun. After a while, I wondered, “Who is this guy? And what’s this University of Houston, anyway?”

As fate would have it, I later ended up here at the University of Houston, where we are indeed interested in the way inventive minds work. I have greatly enjoyed the friendship of the man whose voice came to me decades ago across a continent. Many of us take inspiration from his continuing intellectual passion and, in case you didn’t know about it, his passion for photography as well. I think I’ve shared as many photos with John at this point as I have ideas about ingenuity.

I also felt honored to bookend his milestone 3000th episode with two of my own: 2999 Hannibal’s Grand Strategy and 3001 Archimedes to the Rescue.  John has generously trained many of us to make our work and interests available to a larger audience over the airwaves. While he set the bar high with his own episodes, he has always been quite encouraging of new talent. If there still is such a thing as the notional “Republic of Letters,” I’m pretty sure John could win its presidency in a landslide.